The social media release is designed to maximize online value 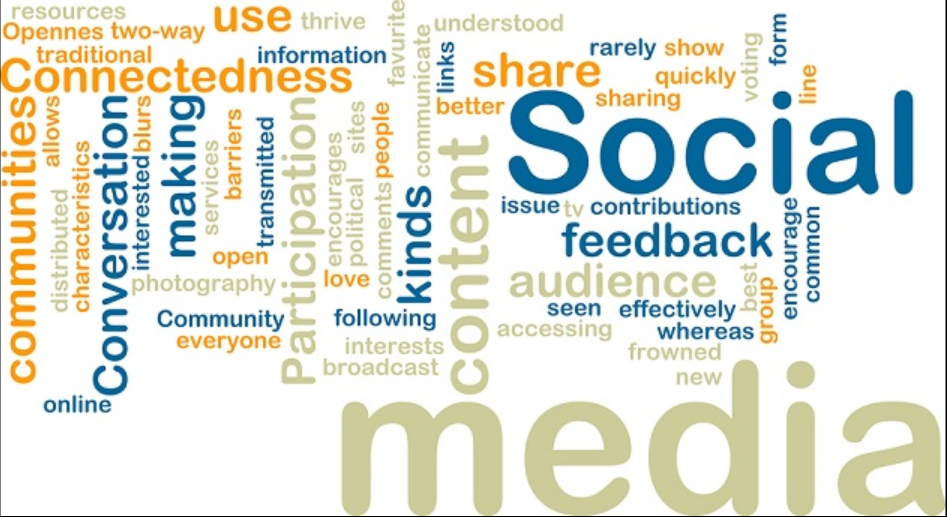 At the time of launch the change was considered quite dramatic, but technology has caught up over time since 2006, and the various components of a social media release have become incorporated into the traditional media/press release. You can review the template below and decide if any of the elements shown can be included in your traditional releases as well.

Social media releases look similar to today’s multimedia releases in format, structure and design, but can open up dialogue in new ways.

One key feature is that the social media release should be in a responsive format compared with the traditional media release. Its layout adapts to the device being used to receive it.

A social media release is posted online rather existing simply as a Word or PDF document attached to an email, etc. By being online, people can search for the release under relevant keywords and can share on social media. Adding multimedia capability to a release increases the number of views significantly.

It must noted that gems are not created out of dross: if a person writes substandard material in a traditional media release (journalists are always complaining about this), they are also likely to write substandard content in a social media release.

So how do we get more “social” with social media releases?

Social can be defined as:

According to Shift Communications, the key elements of a social media release, shown visually, are shown below. Shift don’t seem to be actively promoting the concept in recent years, but you can review the structure and content of their template, below, to see what you might be able to productively use to suit your own requirements: 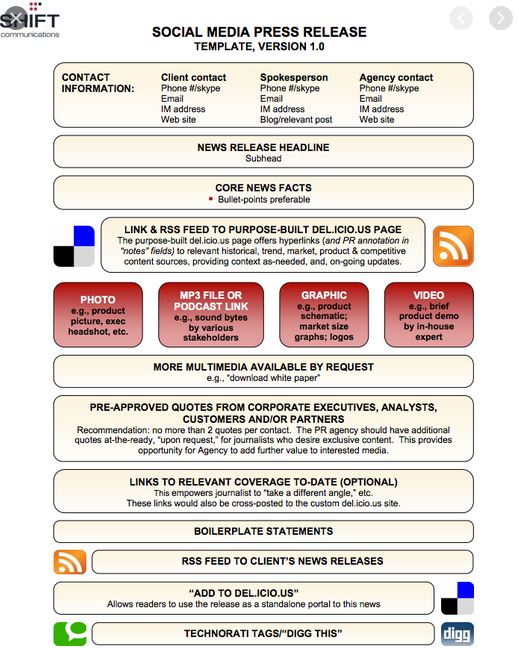 Features of the social media release

Headline: Used as in traditional releases. Use the passive voice to put keywords at the start.

Highlights / key facts: This is one of the major differences of the social media release compared with a traditional press release. Highlights and key facts, are short and to the point statements that are the important takeaways that are the reason for the release. There is no technical limit on these highlights, but keep them brief.

Summary: This is intended to present the highlights of the social media release in paragraphs for those who do not like reading bullet format – it also allows more room for context and to set the tone.

Tags / keywords: Using the most highly relevant tags / keywords for the information in the release, will give it a higher chance of being discovered by people who monitor social media for those particular keywords and phrases. At present, search engines like Technorati and other services create ‘feeds’ for these tags that individuals and organizations use to connect to the information that most interests them. There is no technical limit as to how many tags can be included, but as a practical matter it is probably best to keep it more focused than less; otherwise the value of the system will be eroded as email has been by spam.

Links / URLs: Links may be embedded in most of the other areas of the social media release as most elements allow HTML, and this specific designation of all the links in a separate field emphasizes them in a way that makes it easier for people to access.

Link types: One of the reasons for having a separate area of the Social Media Release for links is to identify them as link types, which adds even greater value. These enable the recipient to identify the links source, relationship and relevancy. Link types will be defined over time based on real world usage. They are initially intended to be left as an open, practitioner-defined field. Examples of link types include, third party review, supporting research, case study, company web site, buy link, and most notably, collections of links such as those created on sites like Delicious and Furl.

Reserved link types: There is the possibility of having special link types reserved such as cascading styles, where a cascading style link type can be used to display the social media release on different sites with a particular style and emphasis. This would allow companies control over the visual presentation of the release.

Quotes: An easily identifiable and widely used element of the traditional media release, showing quotes as a unique field is required. This also leads to types of quotes, which require further discussion and may in fact be left as a user defined field in the initial standard

Embedded audio, video and images: Use existing RSS protocols for creating enclosures that enable practitioners to include logos, photos, audio clips, video and other similar content along with the release.

Company information: This should include separate fields for company name, description, website, stock exchange symbol and whether or not the company is the primary source of the release rather than a party to the release.

Contact information: Multiple hCards can be included here with one being designated as the primary contact. hCards are similar to the types of contact cards that you find in Outlook and contain all relevant information in a common Web standard format.

RSS feed: Within each SMR is the information on the location where someone can find and subscribe to all releases from this company. This URL for the feed may exist on the company site or at a third party location such as FeedBurner or PR Newswire. Additionally, this may serve as a location for all feeds from the company’s blog or just the specific feed for the company’s hReleases.

Date/time stamp: At the original point of publishing, add a date/time indication.

Geography: If the release is intended for a specific geographical area, the SMR can specify the point of origin using geocoding specifications together with an extended radius field. This again is intended to allow for a more targeted connection between the source of the information and interested readers.

Source URL: The source URL should indicate where the SMR was originally published and allow for individuals to return to that source to see if any modifications were made. This also makes it easy for people to reference a link to the original release and to track citations to it.

Trackback URL: Following standard conventions of blogging and RSS, a trackback URL will enable the conversation around the release to be tracked more cohesively – at least among those sources that want to demonstrate that their audiences can feel comfortable knowing that the source of the information is trusted and accurate.

Here are some new (and updated) features for the template

Shift Communications added new features to the original format of their social media release, and they added the following comments with it:

As with traditional media/press releases, you need to coordinate the timing of your social media release to achieve the most productive result. This article, How to get the best timing for successful media pitches, should help you with your thoughts on best timing.