Every time new job growth trends are published by the US Census Bureau, a news outlet somewhere will lament in a “fresh” story angle that PR is killing journalism. I was about to write detailed comments about PR employment growing while journalism numbers are dying, when I noticed Lou Hoffman also commented in a post on 1 May 2019, so I will keep my comments fairly brief.

Bloomberg, a respected business publication, headlined this misleading story (“Public Relations Jobs Boom as Buffett Sees Newspapers Dying”) on 27 April to report on the job trends, and included some irrelevant clickbait about Warren Buffett – who was not quoted at all about PR in the story. Buffett actually demonstrated he is a long-term supporter of the PR industry when his company Berkshire Hathaway bought Business Wire in 2006.

Bloomberg reported there are now 6.4 “PR workers” for every news reporter, claiming the US Census as the source of the data. This figure is very shallow reporting. The data includes everyone who works in the public relations field – not only in media relations, but in every other PR capacity as well.

What’s more, the number of US newspaper newsroom employees is also misleading. The same Bloomberg article quoted Pew Research reporting a 23% decline from 2008 to 2017 in the number of reporters and correspondents, but this figure included news analysts, editors, photographers, as well as TV, video and motion picture camera operators and editors. Admittedly, the trend is clear, but the writing should be more accurate. 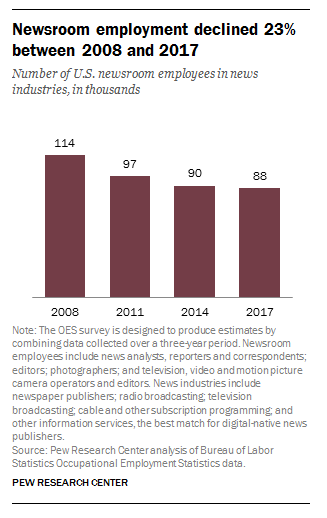 US newspaper circulation continued its dramatic slide in 2018, as shown in the Pew chart below, which contains the most recent data available at the time of writing. 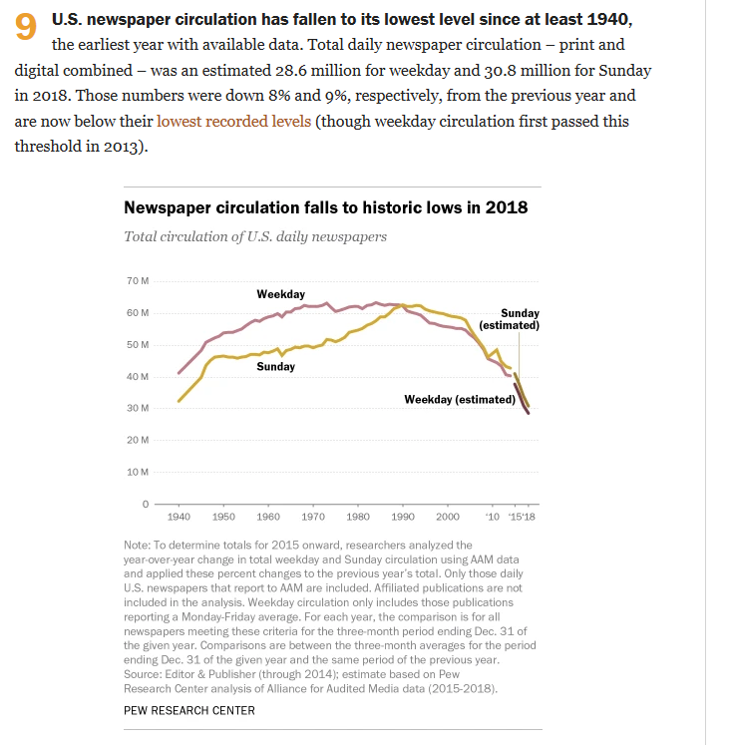 Many journalists have moved into PR thinking it would be an easy shift because they assume PR is all about media relations. But as Shel Holtz observed in his Nuzzel newsletter of 30 April, being a journalist “doesn’t automatically qualify you to do PR. These journalists will have a steep learning curve.” When you think about it, journalism requires quite a narrow set of skills that aren’t easily transferable to a broader business environment, apart from writing activities such as marketing-based digital content including social media. On the other hand, writing skills are only one component of the communication expertise needed in public relations.

“The communication profession is the living embodiment of complexity. Communication is complex, fluid and often misunderstood.”

I found this early in my corporate career. I was recruited as corporate affairs manager for an engineering company because the previous PR staffer was an ex-journalist whose limited skills meant he couldn’t do much more than write the employee publication. As he had no aptitude or the experience required for a broader communication role, the company got impatient and offloaded him. It recruited me instead, giving me latitude to hire a PR officer as well. (It was a very small department back then!) Only a small amount of the work involved media relations. It was more about stakeholder relations.

In his post, Lou Hoffman examined the PR and journalism job growth trends going back to the start of the internet era in 1997 and found journalism numbers were declining even 20 years ago – a “stagnant industry.” As he said: “This is a long-term trend, not exactly cause for current headlines,” as the trend line shows below. It would be a relief, therefore,if journalists would let go of this “news angle.”

What’s more: you would think after all this time that journalists would understand the reality that PR is much more than media relations, requires a greater range of skills, is more demanding and pays better than journalism. 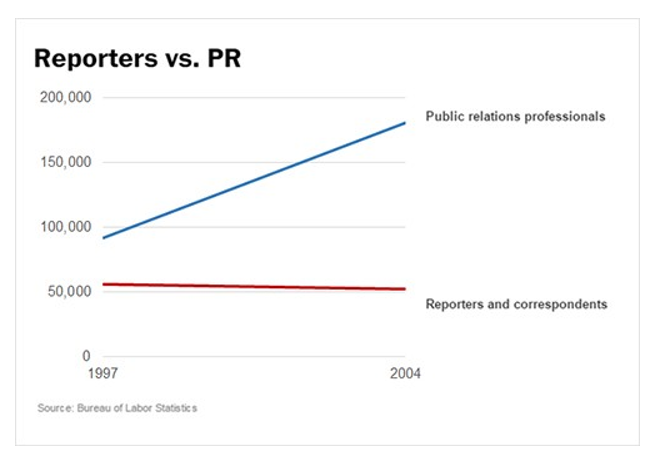