Home / Business management / How credible and trusted are different spokespersons?

How credible and trusted are different spokespersons? 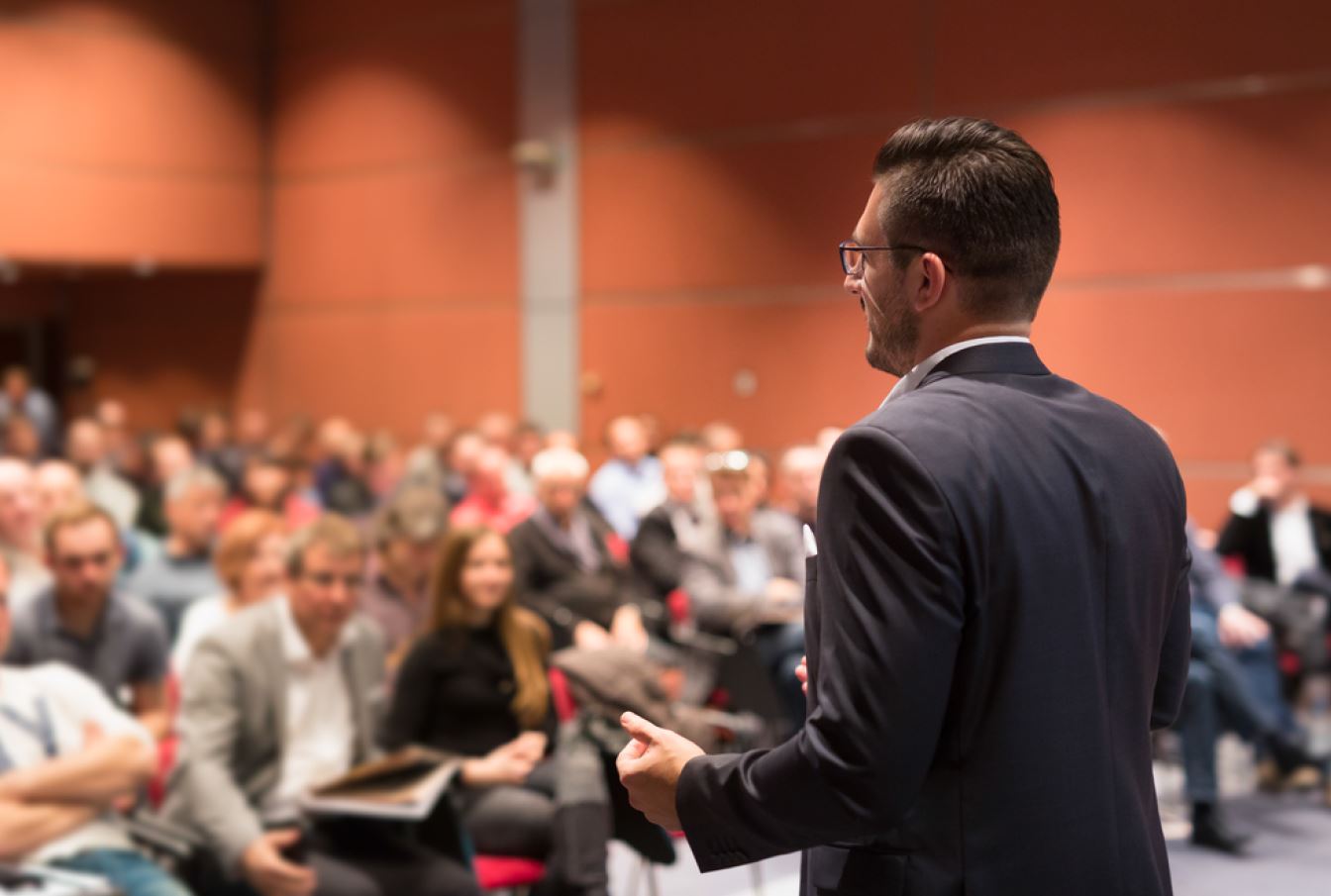 How credible are different sources of news and information in people’s opinions? When putting PR programs together, it pays to understand how well different spokespersons are respected and to focus on the most trusted for best results. You could even keep these results at hand as a reference when planning communication programs. Below is the graph from the annual Edelman Trust Barometer global survey, 2020, which shows the extent to which various sources of information are credible in the opinion of the 32,000 respondents.

“In general, when forming an opinion of a company, if you heard information about a company from each person [in a list shown], how credible would the information be – extremely credible, very credible, somewhat credible, or not credible at all?”

The most trusted spokespersons were experts and peers, as shown in the above table.

The global results reflect the lack of trust within society for leaders of organizations. The inference to draw from the findings is that company technical experts and academic experts are the best persons to speak on relevant issues. Even though ‘a person like yourself’ and ‘a regular employee’ are next in line with their personal credibility, they are highly unlikely to be suitable organizational spokespersons. They may well suit being quoted in print, but unlikely to suit video roles. Therefore, the important spokesperson role belongs to the CEO as the logical spokesperson. The CEO should therefore take part in extensive media training to ensure he or she can handle the role successfully.

No wonder the Edelman Trust Barometer global survey 2020 found the ‘mass population’ had little trust in business ‘to do what is right,’ with the trust index averaging 55 for business institutions. At least the ‘informed public’ trusted business more, with their trust in business rated at 70. But the informed public in the survey only represented 17% of total global population. Image: from Edelman Trust Barometer survey 2020. 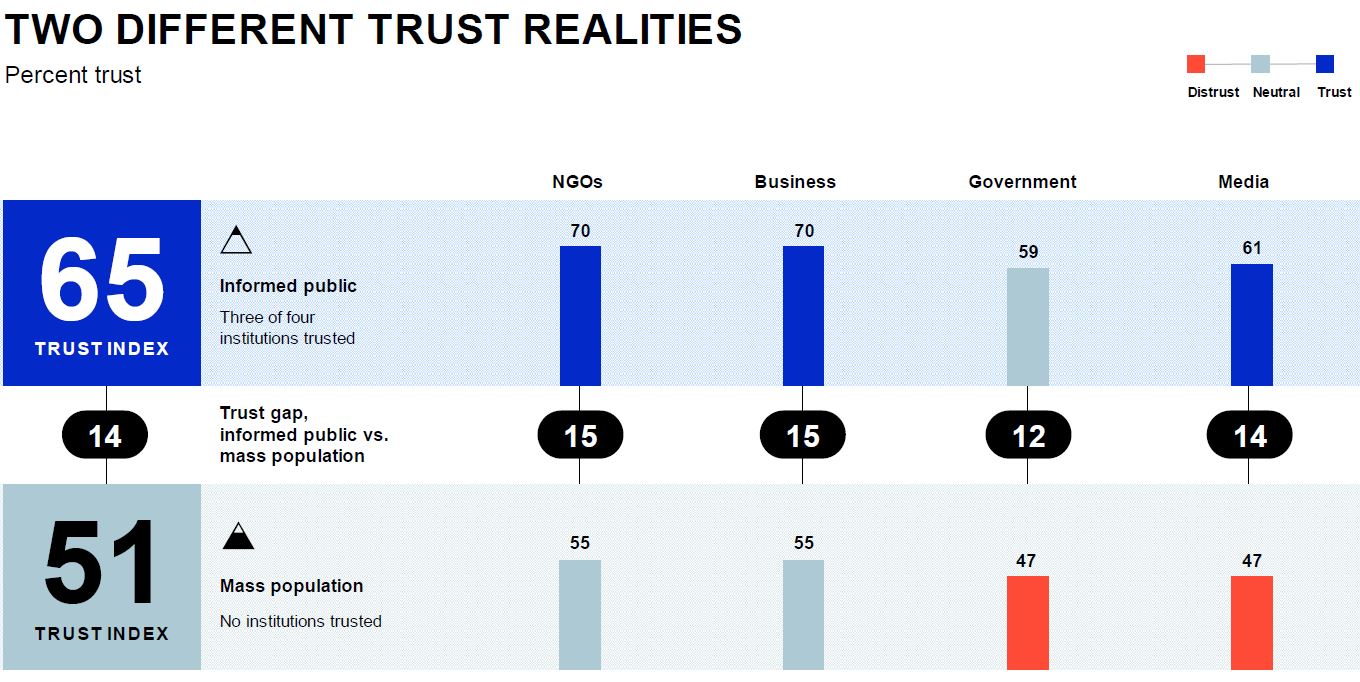 “Capitalism under fire” declared the Edelman survey headline for global trust in capitalism. An average of 56% of respondents agreed with the statement “Capitalism as it exists today does more harm than good in the world.” And only 18% of people agreed that “The system is working for me.”

Scandalous pay at the top

Employed workers, especially in large corporations, understand the massive pay their CEOs receive. Such pay is scandalous. Some CEOs in large companies are paid 1,000 times more than the median salary of their employees, after taking stock allocations into account, as reported in a New York Times article in 2019, which also stated:

In 1970, University of Chicago economics professor Milton Friedman wrote a famous article in the New York Times, in which he basically justified corporate profit maximization ahead of any other priority: “The Social Responsibility Of Business Is to Increase Its Profits.” The article “helped launch a half century of ‘shareholder capitalism,'” according to Claudine Gartenberg and George Serafeim, the two business professor authors of a 2019 Harvard Business Review article. 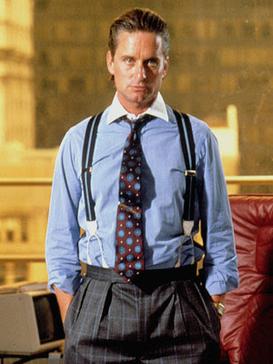 This shareholder primacy attitude was echoed in the 1987 movie Wall Street, in which Michael Douglas, starring as Gordon Gekko said, “Greed, for lack of a better word, is good.” Influential corporations have started to acknowledge that other stakeholders are just as important as shareholders. Image: Michael Douglas as Gordon Gekko in ‘Wall Street.’

On 29 August 2019, the US Business Roundtable issued an open letter titled “Statement on the Purpose of a Corporation.” A prominent business lobby group, the Business Roundtable, includes the CEOs of 181 leading companies representing nearly 30% of total US market capitalization. The letter contained a one-page declaration that ended with: ‘Each of our stakeholders is essential. We commit to deliver value to all of them, for the future success of our companies, our communities and our country.’” According to the statement, corporations are accountable to 5 constituencies, of which shareholders are only one. The others are customers, employees, suppliers, and communities. In that sense it is a classic articulation of ‘stakeholder capitalism.’ The letter has generated public support such as the opinion expressed in the New York Times of 23 September 2019: “The Virtuous Corporation Is Not an Oxymoron.”

The growing public support for ‘stakeholder capitalism’ is reflected in the overall attitude found in the 2020 Edelman trust survey – around 87% of respondents agreed with the statement: ‘Stakeholders, not shareholders, are most important to long-term company success.’ They ranked the 4 institutional groups in terms of their perceived importance to a company achieving long-term success as Customers 38%, Employees 37%, Shareholders 13% and Communities 12%.

Around 74% of survey respondents from the public around the world agreed that ‘CEOs should take the lead on change rather than waiting for government to impose it.’ Nevertheless, it is likely that companies will change slowly. The two US business management professors, Vijay Govindarajan and Anup Srivastava, who wrote the article, “We Are Nowhere Near Stakeholder Capitalism,” published in the Harvard Business Review in January 2020 believe:

“If you read the headlines coming from the 2020 World Economic Forum at Davos, you may start believing that public corporations have fundamentally changed their raison d’être: from creating value for shareholders to benefiting society-at-large. In our opinion, this conclusion is premature. We haven’t seen real change yet, and we won’t without first transforming firms’ performance measurement systems.”

The Edelman research also found that trust in institutions is built on competence and ethics. However, at present members of the general public perceive the business sector as competent, but not ethical. Also, they see businesses as being unfair – they agree with the proposition that business serves the interests of only the few. These respondents in the Edelman 2020 survey believe ethical business principles are 3 times more important than competence in forming their trust in a company, and hence strongly influencing the company’s reputation.

Long-term research consistently underscores that CEO reputation is one of the fundamental drivers of corporate reputation — and significantly contributes to market value. Executives estimate that 44% of their company’s market value is attributable to the reputation of their CEO. This
extraordinary interdependence between CEO reputation and market value demonstrates that leadership is a resource worth investing in and cultivating.

Over time, expectations placed upon a CEO have increased – a CEO is expected to take a stand on social or environmental issues that matter to people and the planet, but are not always related to short-term profits – or even shareholder expectations.

According to Weber Shandwick/KRC Research:

“CEO engagement today encompasses a range of activities, from a CEO’s internal and external communications to their willingness to be accessible to the media to having an online presence. Taken as a whole, the degree of a CEO’s engagement is something that he or she can control, dial up, dial back, or calibrate depending on the situation.” To become accomplished as the chief organizational spokesperson, the CEO needs to spend the time and attention to ongoing, intensive coaching in that role.

The findings from the 2020 Edelman Trust Barometer survey are on the same wavelength – many people around the world want CEOs to more actively address societal challenges in the public arena. For instance, the proportion of people who agree that “It is important that my employer’s CEO speak out on one or more of these issues”:

In view of these prevailing perceptions of responsibility, ethics and caring, CEOs need to work on building trust in their own role as spokesperson and the role of their business in clearly engaging in ethical activities that build reputation.