Best body type alignment – Is it more effective to use justified typesetting or ranged left (ragged right) typesetting for text (body type) in a printed publication? Justified typesetting is when the words at the start and finish of every line in a column of printed text are flush or evenly aligned with the words at the start and finish of all the lines above and below so they form a clean edge down each side of a column of text. Find out here the best alignment for typesetting in printed publications.

There are four basic typographic alignments:

Text is aligned along the left margin or gutter, also known as left-aligned, ragged right or ranged left. In English and most European languages where words are read left-to-right, text is usually aligned ‘flush left’, meaning that the text of a paragraph is aligned on the left-hand side while the right-hand side is ragged. This alignment type follows the natural flow of language and the eye’s gaze. It’s an easy choice for any large text blocks in your design layout. This is the default style of text alignment on the internet for left-to-right text. Professional’s observation:

Web pages. Text alignment in web pages is, by default, to the left, with ragged edges on the right. In flush-left, the text the left margin is even and predictable and the right margin is irregular. It is the most legible option for web pages because word spaces are consistent, so there are no big holes inside the lines of text.

To work with flush left, the designer must pay attention to the appearance of the rag on the right edge. There should be no excessively long or short lines, and hyphenation should be kept to a minimum. 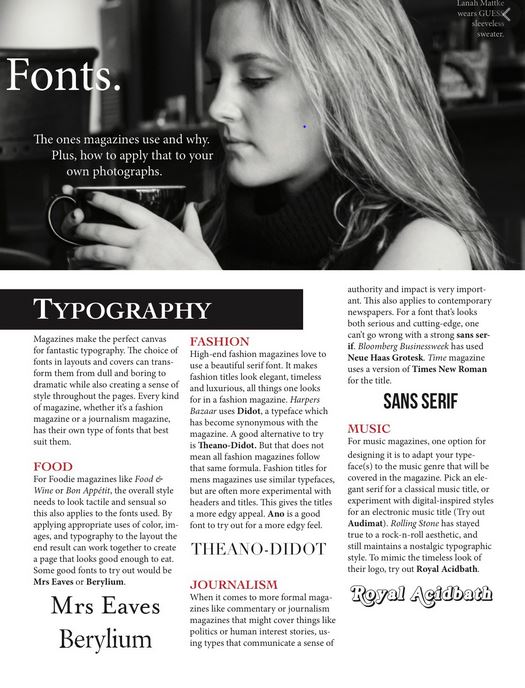 Text is aligned along the right margin or gutter, also known as right-aligned, ragged left or ranged right. In other languages that read text right-to-left, such as Persian, Arabic and Hebrew, the text is commonly aligned ‘flush right’. Additionally, flush-right alignment is used to set off special text in English, such as attributions to authors of quotes printed in books and magazines, or text associated with an image to its right. Flush right is often used when formatting tables of data, especially lists of currency in spreadsheets. Professional’s observation:

Flush right is not a good choice for use with long bodies of text. However, it can be used for sidebars, captions, and marginal notes to suggest attraction among chunks of information, and usually when a small amount of text is meant to sit close to the right edge of a page or screen.

Image, below, of flush-right text: Shutterstock

Text is aligned along the left margin, and letter- and word-spacing – is adjusted so the text falls flush with both margins, also known as fully justified or full justification. Justification can create symmetry on a page if is used in wide columns. It is universally used in books, magazines and newspapers. However, in narrow columns, it can create some awkward gaps between words or even words split into syllables – a syllable or more at the end of one line, and a syllable or more at the beginning of the next line. Commentators observe:

Used well, justified type can look clean and classy. When it’s carelessly set, however, justified type can make your text look distorted and hard to read. Proper justification is a tricky technique to master, but it’s well worth the effort if high-quality, professional-looking typography is your goal.

Justified text…creates a solid rectangle on the page. It is the most popular alignment in newspapers and books because of its efficient use of space. It is easy to read and has a formal feeling.

However, when there is a line with a particularly small number of words, odd spaces can occur. The white spaces throughout the text body are called “rivers”. In print, manually refined letter- and word-spacing and automatic hyphenation can adjust poor spacing. This level of control is difficult to achieve on web pages. 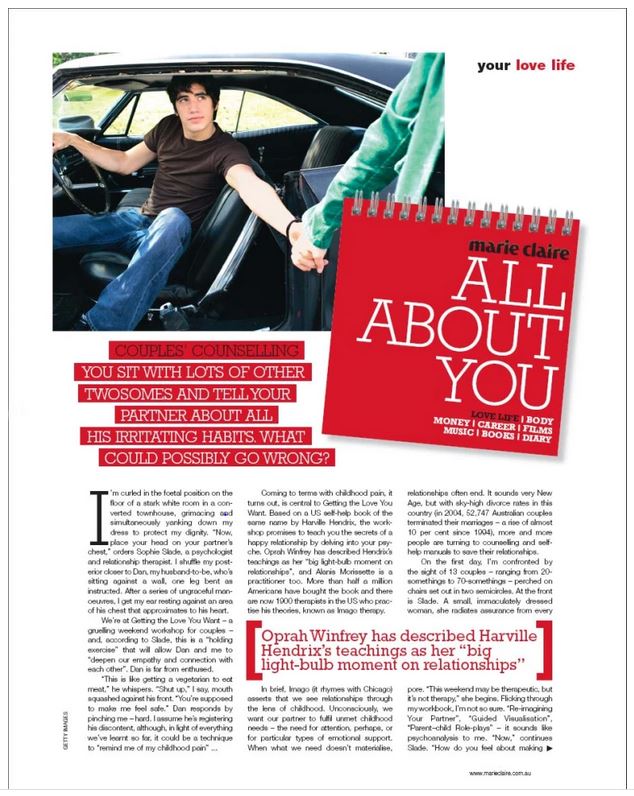 Image, right: sample pages from Marie Claire of justified type. Notice how the headline is on the right-hand side, which reduces its impact because the reader’s eye automatically starts reading at the top left of every page. The first line of the subtitle is barely readable because it comprises black font on a red background. The remaining lines in the subheading are in all-caps, reversed thin white font on a red background, which is centered, making it unnecessarily hard to read. Several rules of easy reading are broken with that effort! An attempt to make the layout of columns in justified body type less boring is offset by the drop cap at the start of the body type, the indented word to start every paragraph, and the inset in red font to highlight a quote from Oprah, as you can see.

A syllable is a unit of pronunciation having one vowel sound, with or without surrounding consonants, forming the whole or a part of a word; for example, there are two syllables in copy and three in syllable.

A vowel is a speech sound made with your mouth fairly open, the core of a spoken syllable. A vowel is one of the 5 letters ‘a’, ‘e’, ‘i’, ‘o’, or ‘u’. In English, ‘y’ is sometimes considered to be a vowel. The other letters are called consonants.
A consonant is one of 21 letters or basic speech sounds such as ‘p’, ‘g’, ‘n’, ‘l’, ‘s’, and ‘r’, characterized by partial or full closure of the mouth or throat in which the breath is at least partly obstructed and which can be combined with a vowel to form a syllable.

Text is aligned to neither the left nor right margin; there is an even gap on each side of each line. Professional’s observation:

Centered alignment gives a formal and symmetrical impression. It is a good choice for invitations, titles, certificates, pull quotes, and other discrete pieces of information. However, it is difficult to read long bodies of text. The ragged left margin of centered text makes scanning much harder because the reader must search for the beginning of each new line.

Image, below, of centered text: Shutterstock

Quotations are often indented, especially if the quotation extends over more than one line.

Widows in printed and online text, which we are often told to avoid, are actually not a problem. A widow is a paragraph-ending line at the beginning of the following page or column, thus separated from the rest of the text. (It has a past but no future.) A widow can also be interpreted as 1-2 words at the end of a paragraph that runs on to the next line. I try to avoid leaving 1-2 words on a line to end a paragraph because, for instance with my newsletter, several such instances unnecessarily extend the length of the newsletter down the web page. You can read more about this in my article, “Widows in printed text are not a problem.”

Orphan. An orphan is a paragraph-opening line that appears by itself at the bottom of a page or column and is therefore separated from the rest of the text. (It has a future, but no past.)

Colin Wheildon, the editor of the largest Australian motoring publication, wanted to find out whether it was more effective to use justified typesetting or ragged right typesetting for the column text in his publication (It is generally accepted that ragged left setting is hard to read.). With one million readers, Wheildon wanted to maximize the effectiveness of his printed words.

He tested full pages of type using four columns to the page with Corona Roman type, which is similar to Times New Roman. The comprehension level results for each kind of typesetting were:

The above results are quite clear: typesetting justified at both the left and right side of a line in a column clearly works best for good reading comprehension of columns of text in full pages of printed publications. Comprehension drops away significantly with left-aligned/ragged right setting for columns of text. Wheildon included ragged left/right aligned typesetting in the test, although he knew from experience it would be disastrous, and indeed it was, with only 10% of readers showing good comprehension of the text set in this way.

In A4 or quarto-sized, full-width pages of text widely used with computer printers, the content is easier to read when it is justified left/ragged right. If the page has justified text on both the left and right, the eye has moved across a considerable width of text before moving down to the next line. This is more difficult because all the lines of text end in the same vertical line down the right-hand side of the page.

Ideal character count for each line in a column of print

This is rather subjective, but general agreement points to 60-65 characters per line (including spaces) for printed pages. In Colin Wheildon’s research, 38% of readers found body type set wider than about 60 characters hard to read. A further 22% indicated they probably wouldn’t read wide-measure (wide columns) body type even though they didn’t find any difficulty in reading it. Also, 87% said they found extremely narrow measures (column widths), such as less than 20 characters, hard to read. Obviously, headlines and design elements are different matters.

You can easily double the effectiveness of your publications!

My article explaining how you can easily double the effectiveness of your publications is extremely helpful for preparing both printed material and web content. Read the findings from this research conducted into the fundamentals of reading a page in the English language.

(Although Colin Wheildon’s original book is out of print, a more recent version is available under the title: Type & Layout: Are you communicating or just making pretty shapes? Author Colin Wheildon, publisher The Worsley Press, Melbourne, Australia, 2007.)