As a professional communicator, you need to use many styles of writing in your work, not just the widespread news writing formula of the 5 Ws and at least one H, which is based on the first paragraph of any news piece, as noted in my article, “Get greater impact at the start of your articles.” But what about writing stronger endings for your articles? What would that achieve? There are actually many ways to write stronger article endings.

In a Medium article reviewing endings of top articles, writer Jason Chen analyzed 100 top US feature articles published in The Atlantic, Fast Company, The New York Times, including six written separately by top author Malcolm Gladwell. Shen said he wanted to look at feature writing that explores people, places, stories, and ideas that have significance: articles that are timely and read for their perspective, not just for their raw information. He wanted the articles to have been carefully edited (which meant cover stories) and had created reader interest (which meant looking at the most shared pieces of writing).

Shen’s investigation makes sense for comms pros to learn from. We write much more than press releases. We write a wide variety of material such as feature stories, human interest stories in internal and external publications, updates of information, speeches, video scripts, annual reports and other types of reports, organizational commentary on public issues such as the growing impact of climate change on our lives and working environment, social media items, storytelling, messaging, blog content, copywriting, etc. Therefore, knowing how to write stronger article endings makes our writing more effective.

Readers take a different approach to the endings of articles than the beginnings. Shen says two elements that affect your read-ratio (how many people read to the end) are length and popularity:

Although not everyone makes it to the end of every piece, the readers who do reach the end matter much more. They are more invested in your work and will be the ones most likely to remember, talk about, and share your writing, which is good for SEO. And you want them to finish on a strong note. It’s worth striving to write stronger article endings.

Nobel Prize-winning psychologist Daniel Kahneman and collaborators have found that people seem to form memories based on averaging the most intense part of an experience and its final moments, a tendency that they dubbed “The Peak–End Rule… there’s no reason why this rule shouldn’t hold for writing.

Using the ending to cement your piece of writing in the reader’s memory and even make an emotional impact makes good sense. By studying great endings, you can also improve the way you close a paragraph, a section, or a piece of writing and create an outsized impact for your most engaged readers.

So how does great writing conclude? In what ways do you think you can write stronger article endings? Find out below.

Shen analyzed how the top articles conclude and how they can be an example for you “about honing the ending of your own articles” to achieved stronger article endings. His analysis found 23 specific elements of endings, as shown in this table: 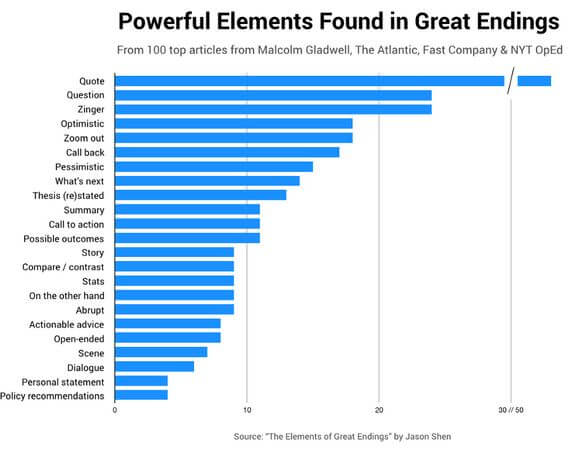 An element used more in endings doesn’t imply that it’s somehow “better”—the elements that work best for an article depend on the effect you’re trying to have on your reader, the research you’ve done, and the subject matter itself.

Such elements can be easily used in almost any kind of ending.

Elements in this category require more thinking but can be very satisfying for smart readers.

Elements in this category are found in articles that imply or are meant to drive the reader to not just think differently, but take action.

Elements in this category are more about how the ending is written than a specific item.

These are elements typically found in pieces written by professional reporters and journalists and, while harder to pull off, can be very powerful.

Elements in this category tend to be the very last thing in the article.

How the ending elements differ for entities vs. ideas

As in Jason Shen’s article on beginnings, he differentiates in his article about endings by analyzing topics that are about entities (people, things) versus those about ideas and found that the types of endings also varied based on this classification.

Entity-based articles focus on a specific person, organization, or event. Fast Company might profile a company like Pinterest or Giphy. A New York Times op-ed piece might share the personal story of someone who knelt with former NFL star footballer Colin Kaepernick or encountered workplace sexual abuser Harvey Weinstein. Compared to their articles that focused on ideas, articles that featured an entity were more likely to use Open Ended, Scene, Personal Statement, Dialogue and What’s Next in their endings.

Meanwhile, idea-based articles are about less tangible things: trends, arguments, recommendations. An example from the Atlantic might be an article about women bullying other women in the workplace. That piece might mention a number of companies and share specific experiences people have had, but its subject is bigger than any one of those specific entities.

Compared with their counterparts, articles that featured an idea were more likely to use Abrupt, Actionable Advice, Thesis (Re)Stated, Call Back, and Policy Recommendations in their endings.

Jason Shen goes on to give further details and examples of the ending elements he has reviewed in his Medium article, “How great writers end their articles.” You can benefit by referring to the above lists he has developed as creative thought starters to help you decide on the most appropriate way of ending articles you are writing in your role as a communicator, especially when you may stuck for an idea to end an article effectively.

4 thoughts on “How to write stronger article endings”

How to write stronger article endings